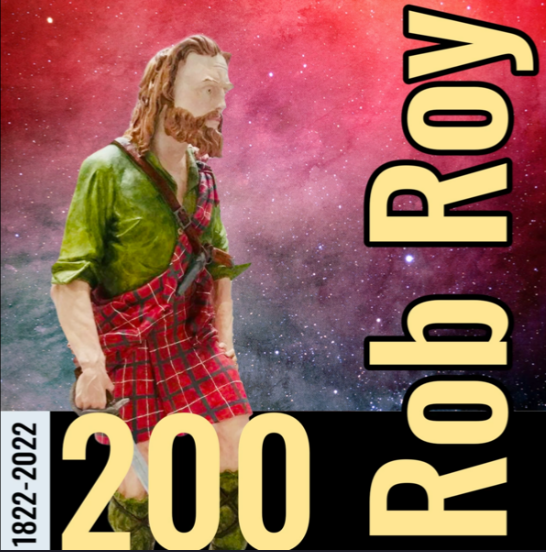 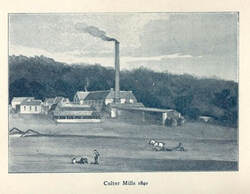 ​The past history of the statue of Rob Roy has much to do with the Culter Paper Mill. The main characters involved in Rob's origins were connected to the Mill in some way. So, knowing who was who should help to sort fact from fiction.
Until 1819, the Mill was operated by one family. Bartholomew Smith first advertised his Mill on the Culter Burn in the Aberdeen Journal of 8th January 1851.
He died on 16 September 1758 and his son Richard took over. On his death on 5th February 1803 the rights in the Mill passed to his son Lewis. He died on 13th December 1819 and the Mill was advertised for sale.

So, in 1821 the new owners took possession at an upset price of £4500. They were brothers, Alexander and John Irvine, they had been involved in brewing in Old Aberdeen. Around 1826 a plot of land was leased above the mill for the building of Workmen's Cottages (Clovencraig). In 1837, the Mill once again changed hands- this time for £10,000. The new owners were Thomas McCombie of Aberdeen and Robert Arbuthnott of Peterhead. Sadly, Thomas died in 1840, at the age of 26, and Robert continued alone. In 1856, the Mill was sold to Pirie and Sons of Stoneywood. In 1865, they formed a new Company- Culter Mills Paper Company, Limited.

In 1926, at the unveiling of (the then) new Rob, Chairman James L. Geddes said that he believed the first statue had been the figurehead of an old Peterhead whaler picked up in Aberdeen by Mr David Anderson, who was for many years a valued employee at Culter Mills. "The original figure, which lasted for only a few years must have been put up in the early 'fifties". (1850s).
Enter, our key witness- William Marshall, a Master Carpenter and Mill Wright of Stankfield and North Lodge, Culter.

William Marshall (1813-1891) enters our story as a key witness. As time marches on, memories fade and details forgotten. So when James Geddes, in 1926, thought that Rob’s origins were “sometime in the ‘fifties” there was no-one still alive to dispute his theory. The local newspapers and census records though let us get closer to a truer version of events.
In June 1882, the then current Rob Roy (1867 statue) was beginning to show signs of wear and a subscription was set up to restore and repair him. Donations could be sent to “Mr James Johnston, at Culter Paper Works or Mr Thomas Morrice, Merchant, Culter”. This prompted a response in the following edition of “The People’s Journal” from a correspondent “DH”. He had the details of Rob Roy’s beginnings told to him by William Marshall. At that time, William Marshall was aged 69 and living at the North Lodge of Culter House estate. He had been the local carpenter and Mill Wright as his father, Alexander Marshall (1785-1855), had before him. Alexander was born at Tillyoch and later took on the tenancy of Stankfield, on the Culter Estate. Alexander and his wife, Agnes Cooper brought up their 4 children there, Agnes, William, Alexander and James.
​
William was to marry twice. His first marriage was to Isobel Christie, on 14th October 1839 at Peterculter. Unfortunately, she died soon after. He remarried a Fyvie lass, Beatrice Stewart (1811-1873). They had one daughter Beatrice Mary Marshall (1848-1928) who went on to marry James Merchant. He appears in the 1871 census, at Stankfield, as an Apprentice Carpenter to William Merchant. William died at the home of his daughter and son-in-law, 30 Urquhart Road, on 9th March 1891. Then aged 78, he had suffered from chronic bronchitis for seven months, and died of pulmonary congestion. 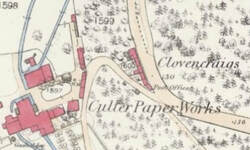 ​The row of houses known as Clovencraigs still sits above the site of the Culter Paper Mill. This area was leased, from Mr Duff of Culter Estate, by the Mill owners in about 1826 to build workers cottages. There were originally many more buildings, as seen here in in an 1865 map. Right on the corner, at the very top of the “Mill Brae” was the original Post Office. It was also a grocers shop. There were two arrivals ( 8.15am & 5pm) and two departures (11am & 1pm) of mail every day. The PO was not a money order office.
The Mill owner also provided a school - for the education of Mill workers children. In 1834, a meeting of the local Temperance Society took place at “Mr Machray’s schoolroom, Clovencraigs”. It was to the Mill owner’s benefit to keep the workforce in sober habits! In the list of Male Heads of households from 1838, we find “James Esson, teacher, Clovencraigs”.

However, an advert appears in 1839 for a replacement. James Esson is listed in the 1841 Census as a teacher in Holburn Street, Aberdeen.

The pupils of Clovencraigs School were to play a part in our search for the real story of Rob Roy”.

The testimony of William Marshall says that this first statue met its’ end at the hands of children from the scholars at Clovencraigs. Clovencraigs was built around 1826, and we know the schoolroom as in existence in the 1830’s under “Mr Machary” and James Esson. As the article says this occurred “some time after” the bust was placed there. This would suggest, possibly, sometime in the 1830’s. If Mr Irvine, as proprietor of the Mill was involved, this has to have happened before he sold the Mill in 1837 to Robert Arbuthnott  and Thomas McCombie. Again, it is suggested that this model of Rob Roy began life as a ship’s figurehead. This very likely would have been brought out to Culter by the carter, David Anderson. After his marriage, in 1834, he appears to have spent his whole working life at Culter Paper Mills. 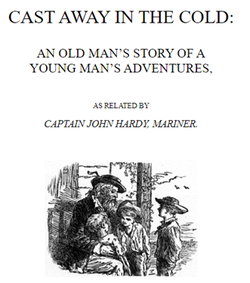 ​The book "Cast Away in the Cold" , available through the Gutenberg project" was published in 1868. It relates the adventures of Captain John Hardy, as a young mariner in the 1820's.
Aboard the "Blackbird" in the Arctic seas another ship approaches:

“In an instant the man was out upon the rocks, and he grasped us warmly by the hands. He had recognized us, now we recognized him. He was the master of a ship that lay alongside the Blackbird when we first went among the ice, catching seals. His ship was the Rob Roy, of Aberdeen.

“This much he said to quiet us, for he saw the state of agitation we were in. Then he went on to tell us that the Blackbird, not having been heard from in all this time, it was thought that she must have gone down somewhere among the ice, with all on board; and he told us further, that he was on a whaling voyage now, and then he said, ‘The Rob Roy will give you a bonny welcome, lads.’

“Now, to bring our story to an end,” ran on the Captain, “I must say first that the Rob Roy was a good, stout ship; the master a bluff, good-hearted Scotchman; the mate a kindly man, and altogether different from the red-faced mate that was on the Blackbird; and the people were all just as good and kind to us as the savages had been. But they gave us right away so much coffee and ship’s biscuit and other things to eat and drink (none of which had we tasted for three years and more), that we got a dreadful colic, and had like to have died. But the next day we were quite well again, and then we related to the Captain and everybody on board the story of our adventures. The worst was, they would make us tell our story over and over again, as I have been telling it to you, until we almost wished we had never been rescued at all.

What was the fate of the "Rob Roy" whaling ship? Was the ship broken up at Aberdeen, or only having the figurehead replaced?
​
The story goes that a Mill worker brought a figurehead out to Culter, and it formed the basis of a statue previous to the 1867 one. This is said to be David Anderson, and his brother is claimed to have been a mariner aboard the "Rob Roy".

His parents David Anderson and Jean Masson were from the Quartowns of Drum. He had 4 sisters and 2 brothers. HIs brother, William, married a local girl and lived at Clayhills, working as a Carter. His brother Sylvester married in 1845 and went on to be a papermaker, working at Wood Hall in Colington, Midlothian. There is no sign of a Mariner in the Anderson family.

In 1834, David, age 20, married Ann Donaldson. He re-married after her death in 1871. So, it is quite likely that he was at Culter Paper Mill for all of his working life.

In 1886, he is a long-standing and well-respected local. At the opening of the Culter Public Hall, David Anderson proposes a vote of thanks to the Chairman of the Public Hall Committee and talks of the Culter he knew.

“ At one time they had a Town Council in the place. They had a Provost and a Town Clerk, three or four Baillies and every official down to the finisher of the Law”. 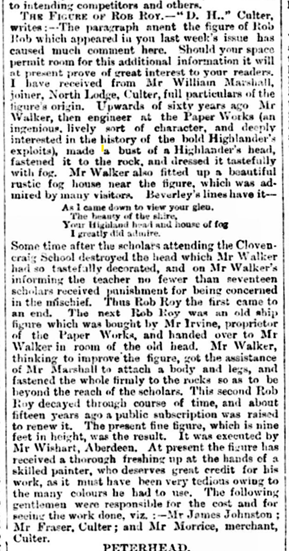 Finally, we return to the main witness- William Marshall. He had been the local joiner involved in this story.
In response to an appeal for donations towards the upkeep of Rob Roy, “D.H.” of Culter offered the first-hand version of events from William Marshall.  This appeared in the Aberdeen People’s Journal of 17th June 1882.
The story of Rob Roy and Culter begins “upwards of sixty years ago”- which takes the beginning of this tale to, at the least, 1822.

“Mr Walker, then engineer at the Paper Works (an ingenious and lively sort of character, and deeply interested in the history of the bold Highlanders’ exploits) made a bust of a Highlander’s head, fastened it to the rock, and dressed it tastefully with fog. Mr Walker also fitted up a beautiful rustic fog house near the figure, which was admired by many visitors.”
​
“Mr Walker”, due to his interest in Rob Roy, the recent publication of the novel “Rob Roy”  in 1817, and the build up of Royal interest in the 1822 visit of King George IV to Scotland has been inspired to take action.  Rob Roy “The First” was a head bust accompanied by a “beautiful rustic Fog House” (moss and lichen).
This gives a total of SIX Rob Roy figures, over the 200 year period.