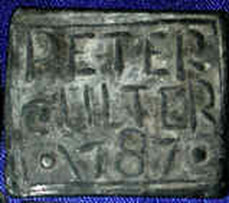 Peterculter- the latter part of the name is said to be derived from the Gaelic compound word  Cul-tir,  which signifies the back part of the country, and would correctly apply to a considerable portion of the land on both sides of the Dee.
King William the Lion bestowed the church of Kulter, “iuxta Abirdene”,upon the Abbey and monks of St Mary of Kelso, about 1165 – 99.
The gift was afterwards confirmed by Mathew, Bishop of Aberdeen, within whose diocese the church was situated
Alan of Soltre, chaplain, who had probably been an ecclesiastic of the hospital, or monastery of Soutra, in Lothian, was presented by the Abbot of Kelso, to the vicarage of the church of Culter, 1239 – 40.
In 1287 – 88, an agreement was made between the Abbot and Convent of Kelso and the brotherhood of the Knights of Jerusalem, regarding the Templars’ lands of Blairs and Kincolsi (Kincousie), on the south side of the Dee, by which a chapel, erected by the Templars at their house of Culter, was recognised as a church, with parochial rights, for the inhabitants of the said lands.
It was this agreement that changed the existing parish of Culter into two separate parishes with two separate names.
The following is a rough translation of the Minute of that agreement.

Thus arose the separation of Culter into two parishes, Peterculter and Maryculter, north and south of the River Dee, named from their respective patron saints, St Peter and St Mary.
The successful plea of the Templars was not to be of lasting benefit to them, since their own existence was to cease in another 25 years.
The wealth and power that the Templars enjoyed could not fail but to produce envious notice. In due time the Holy See and leading European rulers began to combine by formulating charges against them. Scotland was less intolerant, but the Wars of Independence had exhausted the country and the temptation to share in their wealth was difficult to resist. There was no appeal against such unjust persecution, and the Order duly crumbled after an existence of nearly 200 years: 1118 – 1312 A.D.
The Knights of St John, (The Hospitallers), had been the Templars main rivals. This Order had its headquarters in Torpichen, West Lothian. In the end  it was decreed that the Order of the Knights of St John should inherit all of the Templars wealth and property. Generally speaking the wealth of the Templars never fully reached the new inheritors as various extractions were made by the ‘powers that be’ during the hand-over process. Possibly because Maryculter was such a distant outpost and away from the eyes and grasping hands of those in power, the Knights of St John actually inherited the Maryculter estate intact.
Here the new owners, possibly under some superannuated Knight, settled down to their quiet routines. They must have taken due care of their valuable estate, such as is shown by a record of 1415 when a delimitation of their boundaries was made. Some of the March Stones erected at the time are in some locations still identifiable.

In 1548 after over 200 years of  ownership, the Hospitallers could no longer support what was left of this distant Commandery, by which time only six brothers and a chaplain remained. The Maryculter lands, for the most part passed over to citizens of Aberdeen. The Order of the Knights of St John in Scotland soon afterwards expired.